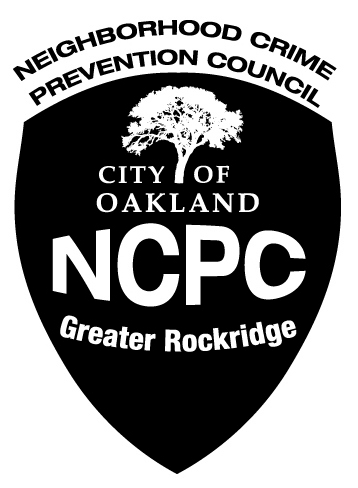 Keep Up with the NCPC

Get regular notices of NCPC meetings, meeting minutes, area crime statistics, and occasional items of interest - sign up for our email list, RockridgeNCPC.  Just click on the link to send a request to subscribe.

Please include a cross street near your property in the sign-up email, so we can be sure we're talking to people in the neighborhood.

Report a crime If you see a crime in progress, call the police!

For MEDICAL OR FIRE EMERGENCIES ONLY, you can call the Fire Department directly at 510-444-1616.

To report a crime that has already happened, call the non-emergency number 510-777-3333, or fill in OPD's Online Crime Reporting form.  You'll find the link on their Report a Crime page.

Here is the Zoom link for all NCPC meetings through February 2023:

Dial by your location

You can find the agenda for this meeting here.  Email the NCPC at chair@rockridgencpc.com if you have items you'd like to add to the NCPC agenda.

About Those Car Burglaries

I'd like to quote from today's column by Matier & Ross, in the San Francisco Chronicle:

What goes into the official crime stats?  Police responses and victims' reports.  A 911 call with no followup doesn't count.

Since Matier & Ross are in San Francisco, this is almost certainly San Francisco policy.  I don't know if it is also Oakland policy.  How much do we want to bet that Oakland doesn't use this policy?

Consider that.  You find that your car was broken into, or your house was burgled.  You call OPD (not 911 - call 510-777-3211, because this crime is over and done with.  911 is for crimes in progress.)  and tell the dispatcher.  You may even get an incident number.  If you don't also go to the police web site and report the crime online, there will be no record.  It never happened.

The crime reporting link is on the top of the front page of the Greater Rockridge NCPC web site.  I check it from time to time to make sure they haven't moved it somewhere else.  If you are the victim of a non-violent crime, use this link to report it to the police so it will be counted when they next assign personnel to areas of the city.

We expect meetings to be virtual, using Zoom, until further notice, depending on the course of the pandemic.